Tara is a San Antonio-based award-winning landscape architect, writer and educator, passionate about eco-friendly solutions and growing her own food. She knows all it takes to help you create a sustainable backyard retreat that combines blissful charm with a modern take on landscaping. 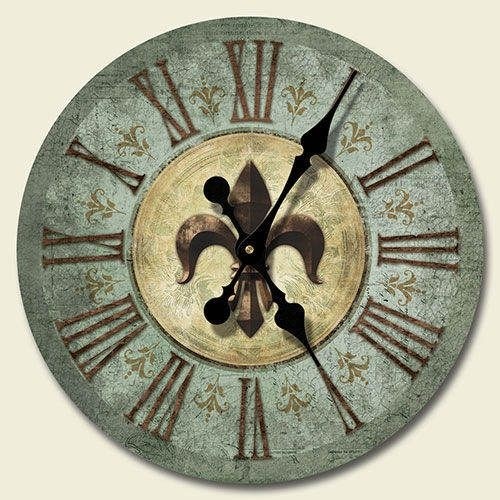 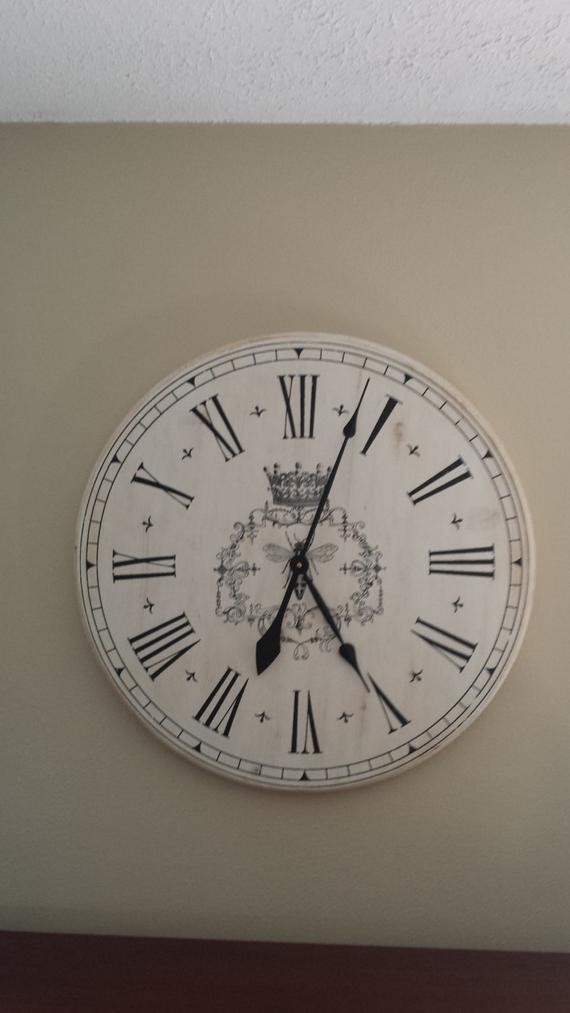 French Country Large Wall Clock
Large wall clock that represents a very nice French stylization in the house. This round clock features a white face with black Roman numbers. It also features large black hands, so everything is readable. 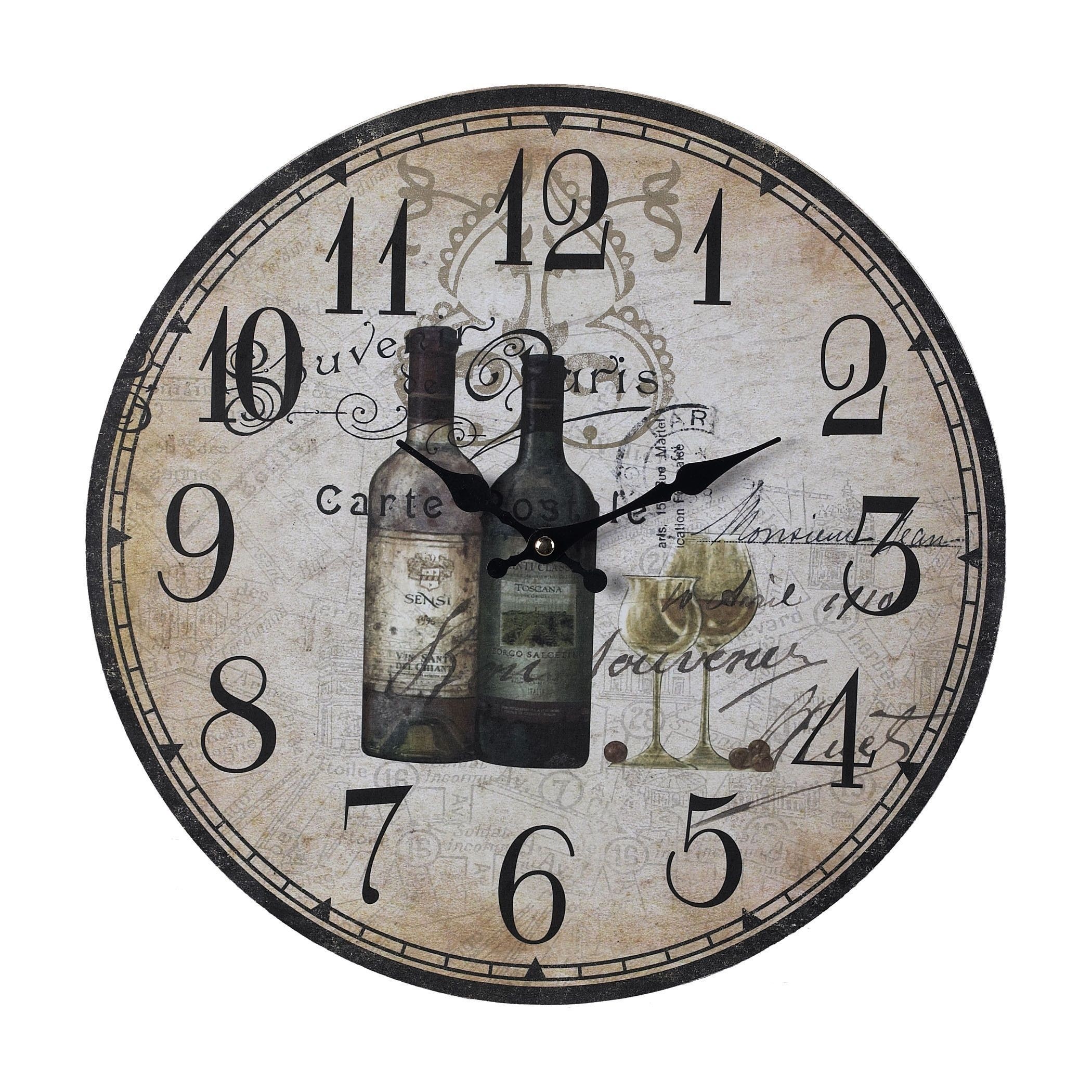 New Eiffel Tower French Country Wall Clock Shabby Paris Provincial Vintage Style
Straight from the French country style, this beautiful wall clock is able to enhance your home with provincial French ambiance. The round dial has two steel black hands and Arabic numerals, all displayed on an off-white background with bottles of wine and wine glasses. 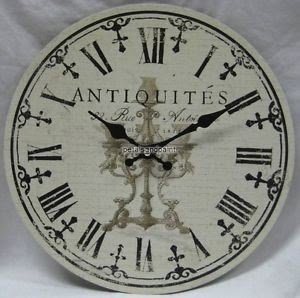 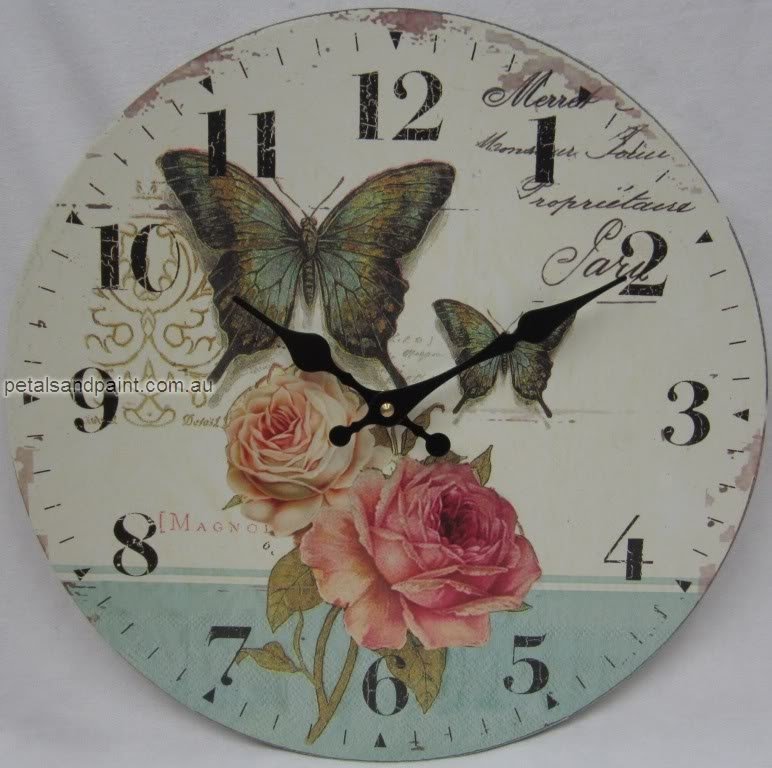 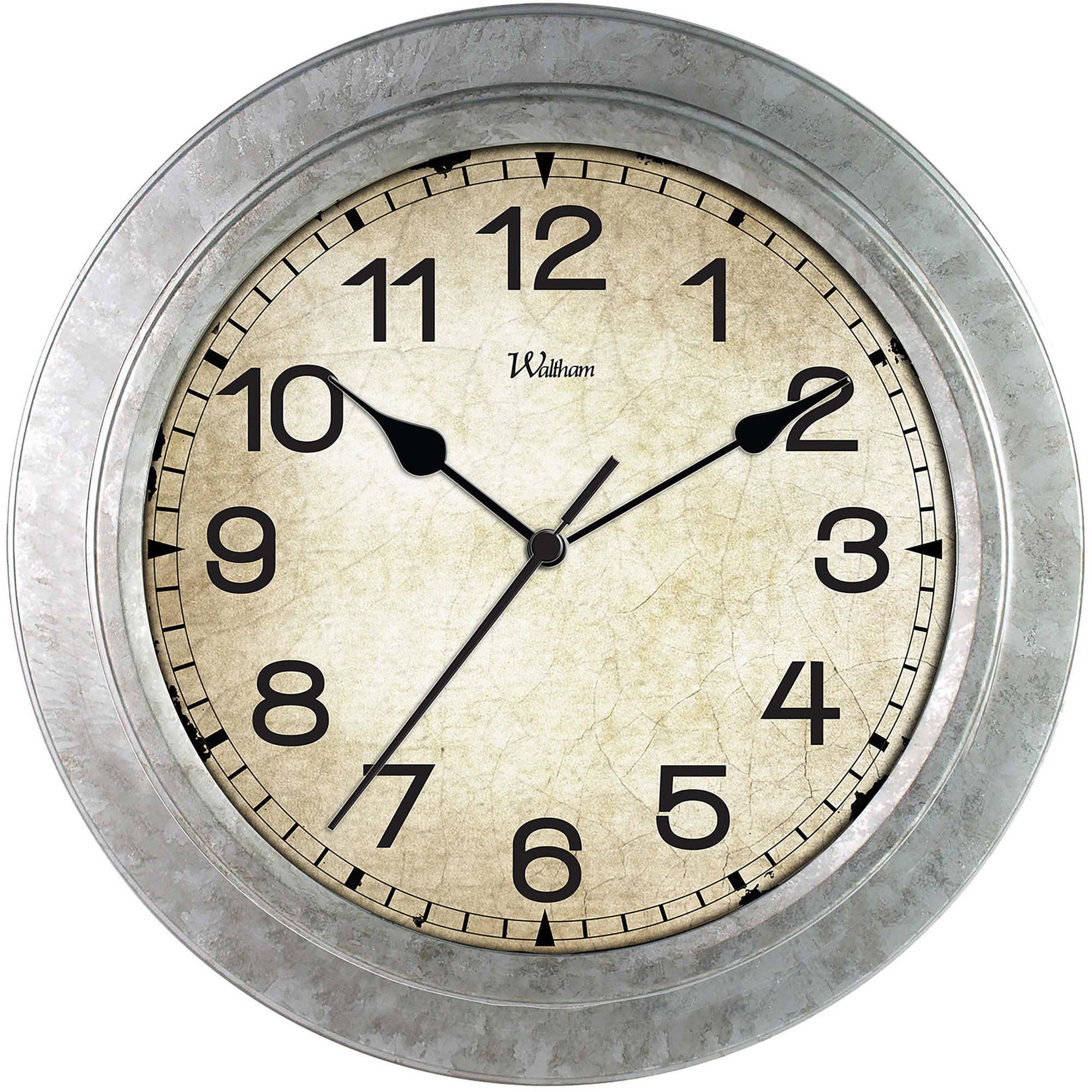 12" Quartz Analog Wall Clock
Lovers of transitional design will take a shine to this analog wall clock. It features elegant galvanized finish case and dial that is easy to read. It is subtle and quiet, with no ticking sound. Unassuming, yet bold in style. 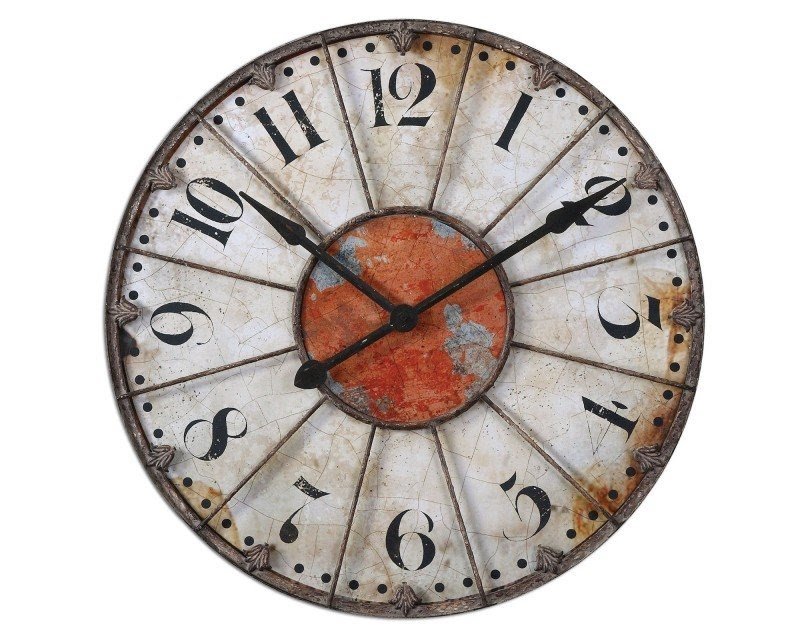 Uttermost ellsworth clock in crackled ivory
Wall clock with antique finish. It is equipped with quartz movement and Arabic numeral. Application on any flat surface. Stylish addition for all kinds of interiors according to taste.

The beautiful vintage look of French country wall clocks makes them a popular addition to many homes. You are likely to have seen several country wall clocks as you visit other people's homes, restaurants and shops. Choosing your favorite French country clock isn't always easy since there are so many designs available, so let's think about them in some further detail to help you decide the right option.

What are the most popular designs of French country wall clocks?

Rather than having traditional numbers from 1-10, Roman numerals are very often used on this style of clock. Not only does it add a more vintage look to the clock, but it can make it look more elegant and simple. The Roman numerals are painted onto the right parts of the clock to make it easy for you to read the time quickly.

When it comes to French country wall clocks, as you would expect, you may see plenty of French words. You may also find the names of French cities and towns painted onto some of the clocks. This could mean that the clock was made there, or it could just be an artistic addition. The wording is often in elegant or calligraphic writing which adds to the sense of sophistication and style.

Moving away from the clock face for a while, wooden frames are popular for French clocks. While many of the designs omit frames altogether, you can achieve a bolder and more attractive look in some cases when there is a frame involved. Outlining the clock face, a weathered wooden frame gives a vintage feel. A few extra details, such as a swirl on each of the four rounded corners and some arched detail above the clock face, enhance the appearance of the item.

A large clock with numbers from 1-10 which are separate pieces attached to give a 3D effect, the main material used here is wood. There are smaller pieces of wood which are stuck to the clock face to indicate each minute that passes by. The numbers are slightly disproportionate in size to the rest of the clock, but makes for a clear and bold clock which adds to a modern look in any home. While looking modern, this design still holds the vintage effects, mainly due to the wooden material and slightly shabby writing detail.

A French country clock which has a floral pattern on the clock face is somewhat different from the unusual patterns that you will see. Mainly with only black and white being used, the traditional designs vary slightly from the floral varieties. The patterns with flowers contain light colors such as pink and green, while depicting beautiful flowers such as roses. A butterfly or bird may even be painted on to the clock face to add some life and even more interest in the piece. Subtle numbers around the face and two thin hands ensure that the focus is not removed from the main artwork. 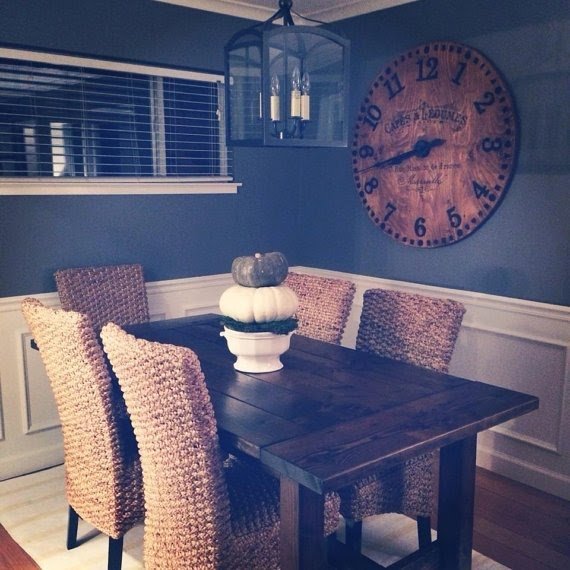 Custom huge french country wall clock 40
Make your home boasts of rustic accents, while using this 40'' vintage wall clock designed in French Country style. The clock has a large, round, weathered dial with Arabic numerals and black hands, without the second hand. 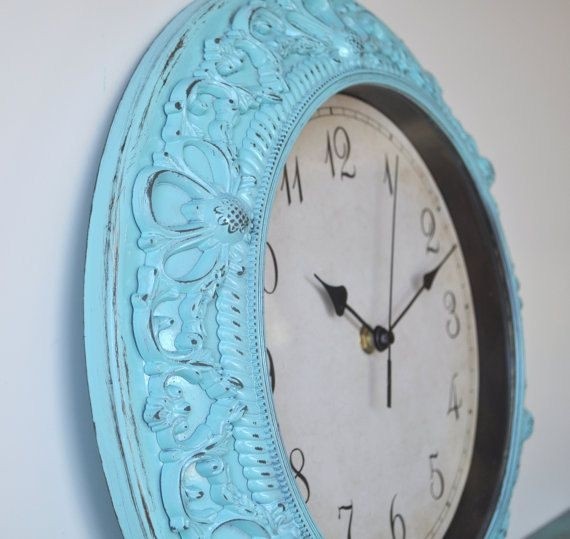 Ornate distressed wall clock aqua shabby
If you are looking for a functional decoration with vintage accents, you can always check this French country wall clock. Its case is round and covered in a weathered aqua finish, while holding a round white dial with Arabic numerals and a black second hand. 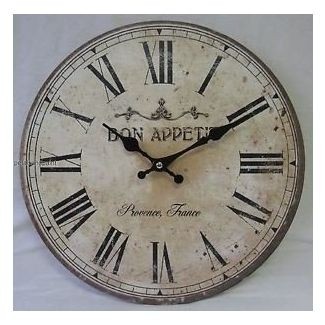 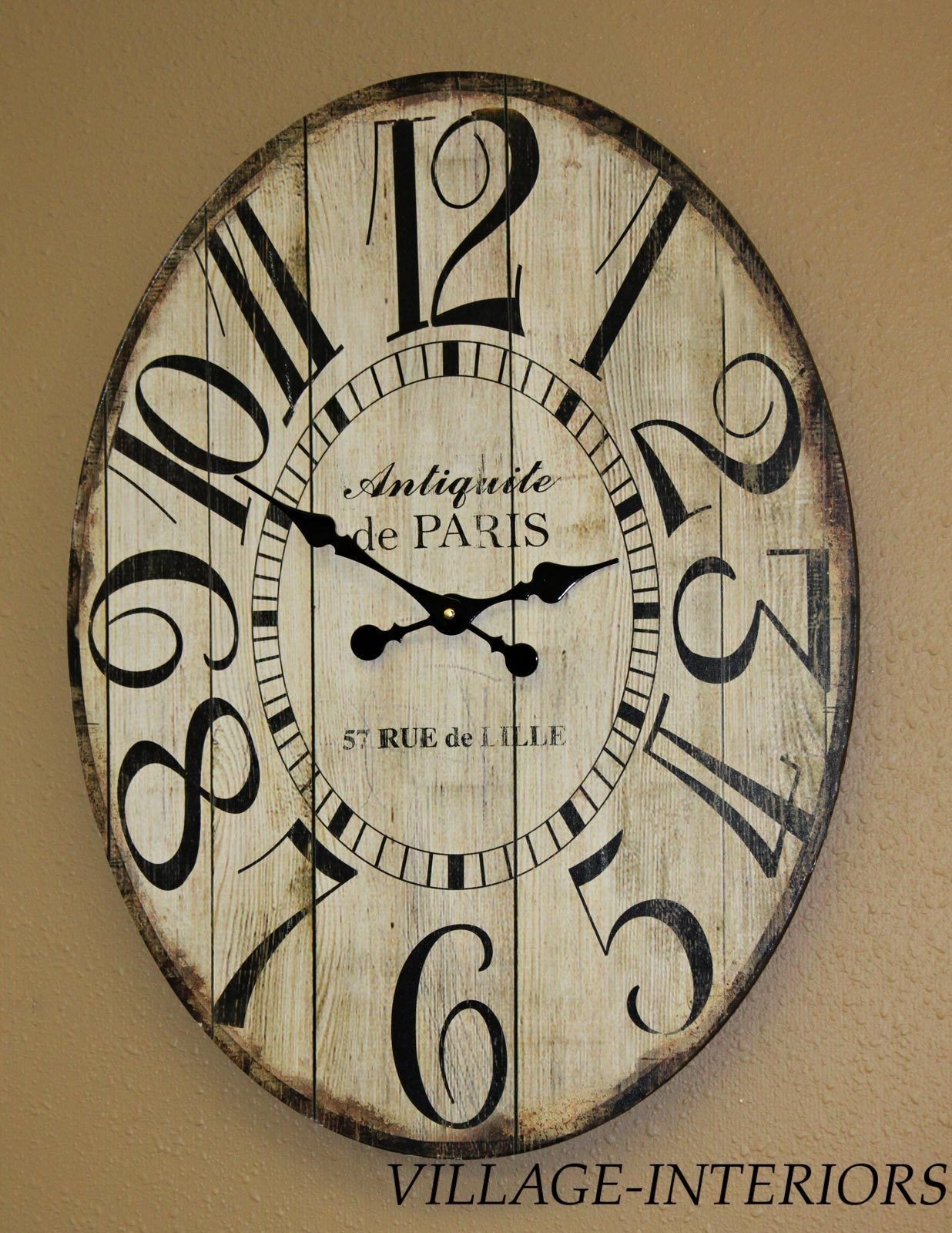 Antique cottage clock inspired of French style. Face of clock is made of wooden boards and it has shape of oval. Every number is hand-painted and very big. It will be fit perfectly to kitchen arrange in rural style. 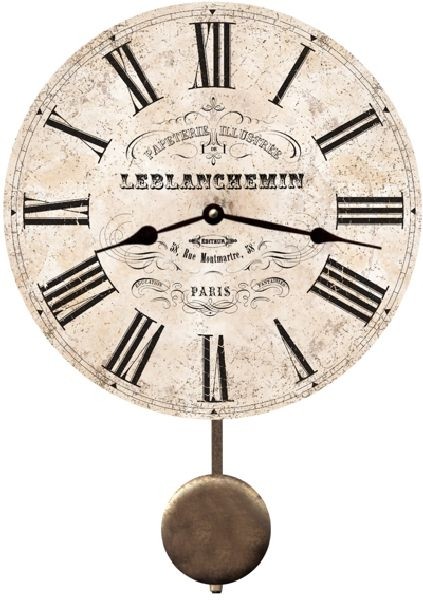 This French-styled wall clock with a pendulum, this beautiful combination of lovely color, circular shield with Roman, expressive figures and excellent tips. Unusual form of the swing adds the whole class. 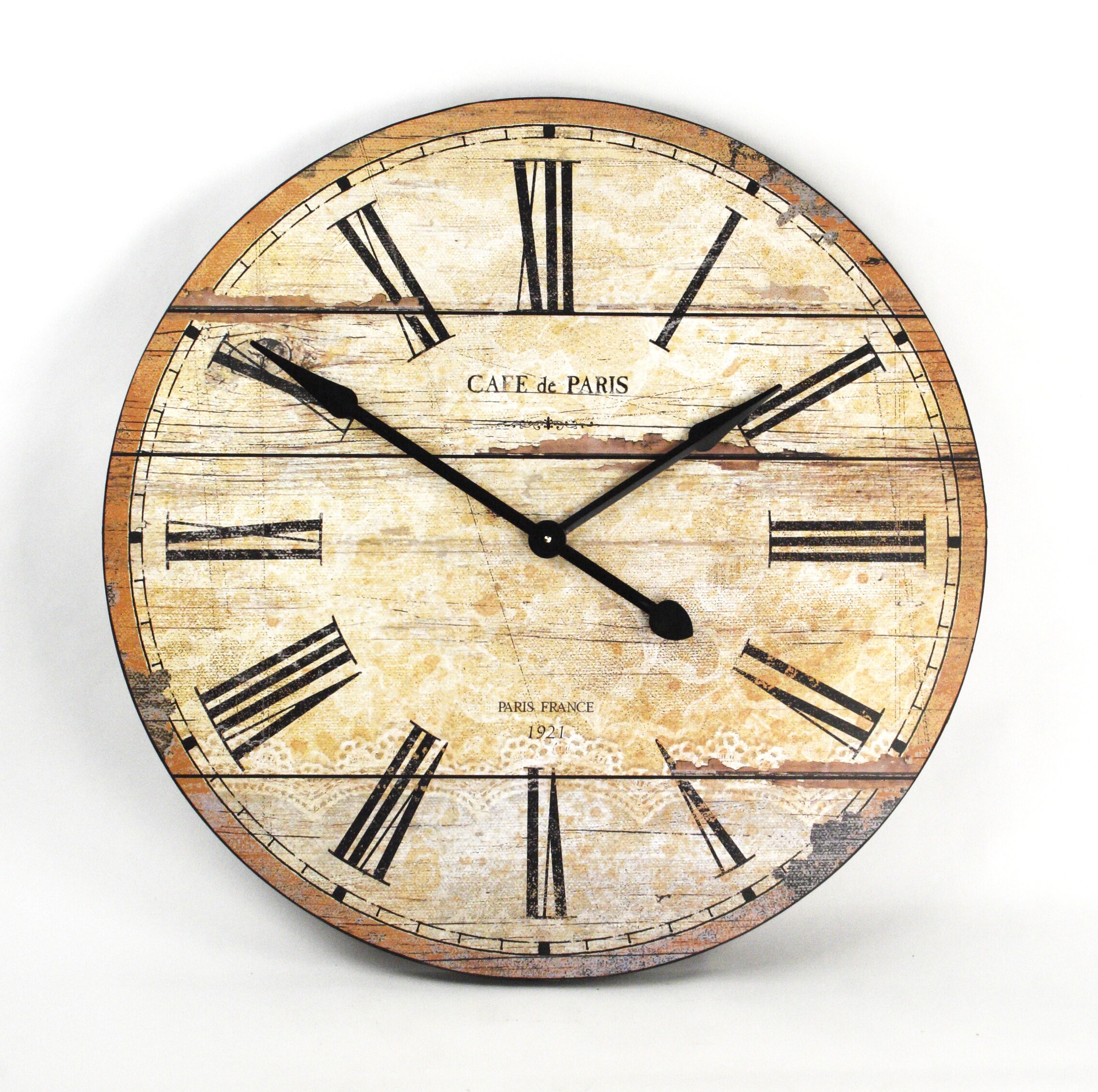 You can easily bring the Paris flavor into your own home, using this lovely wall clock designed in French Cottage style. The dial is weathered, displaying Roman numerals, and having two black metal hands. 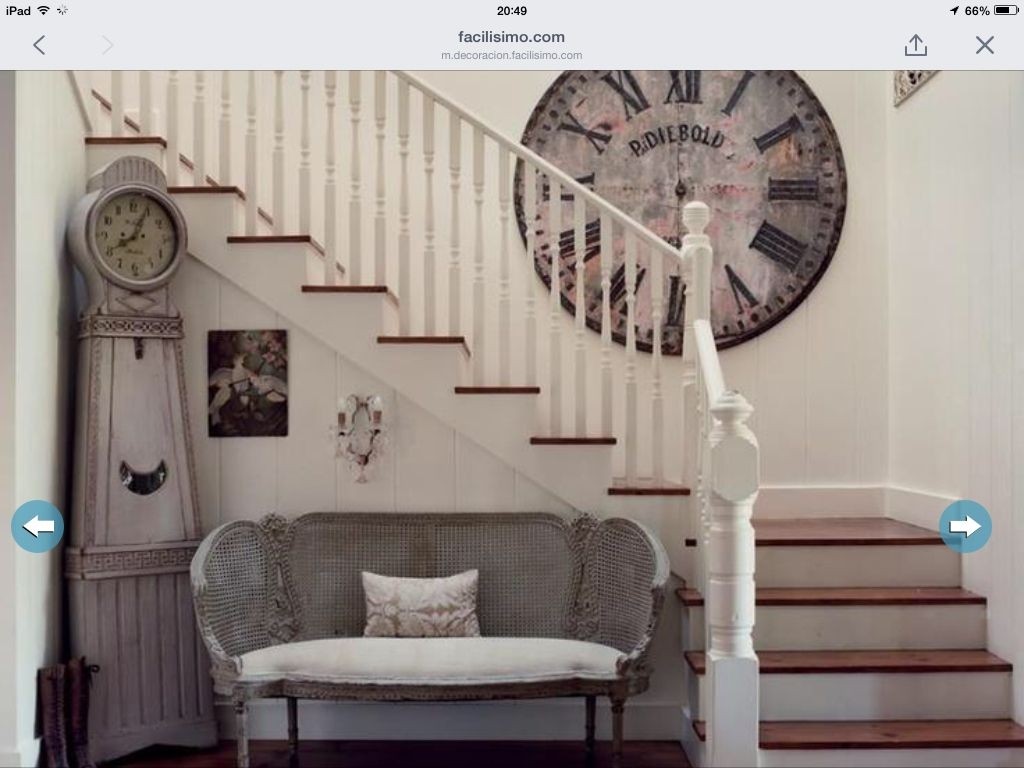 It was not until the 17th century that minute and second hands began to be used.From that time, the time began to accelerate Clocks boast of their decorative value.The large french country wall clock is round with black hours on a gray background. 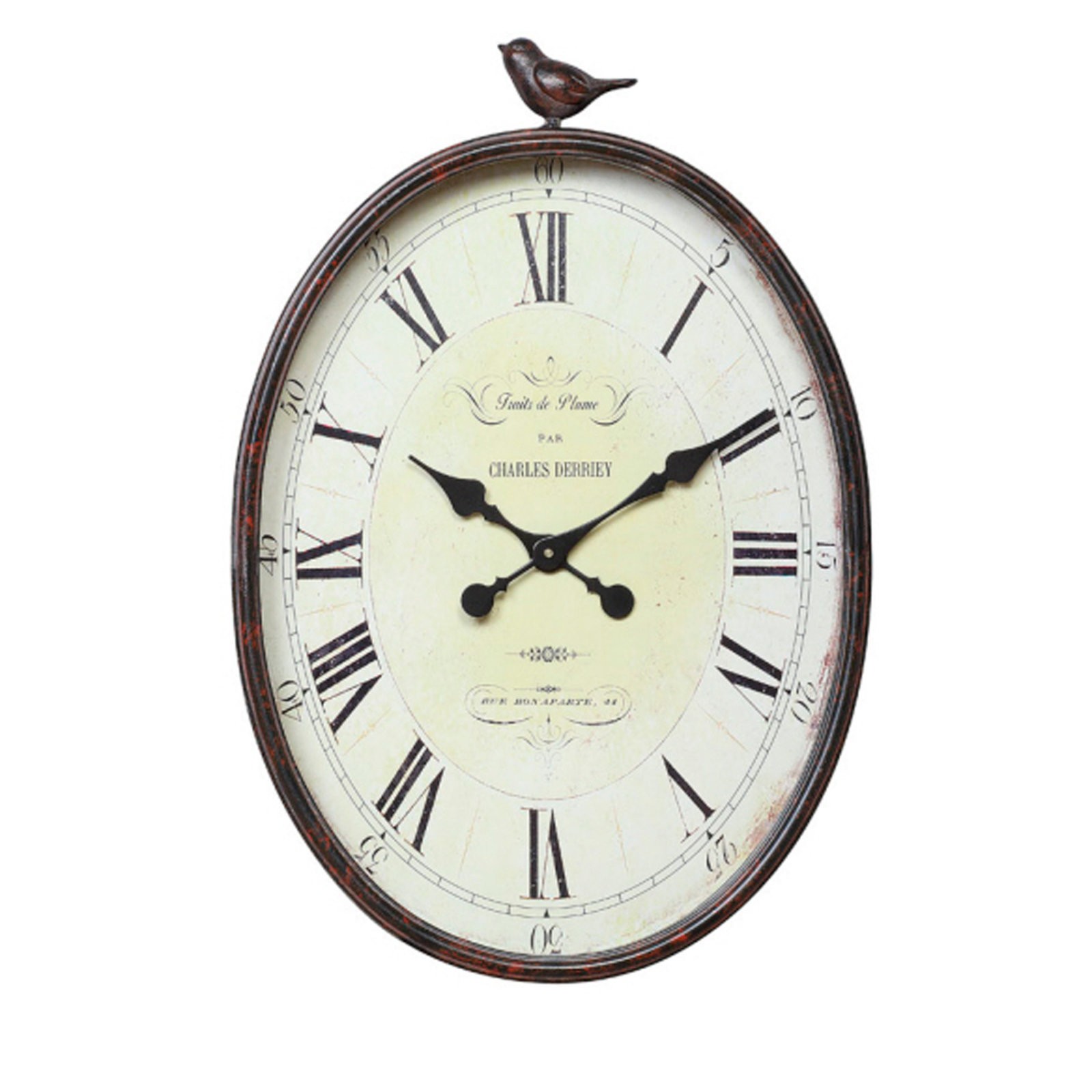 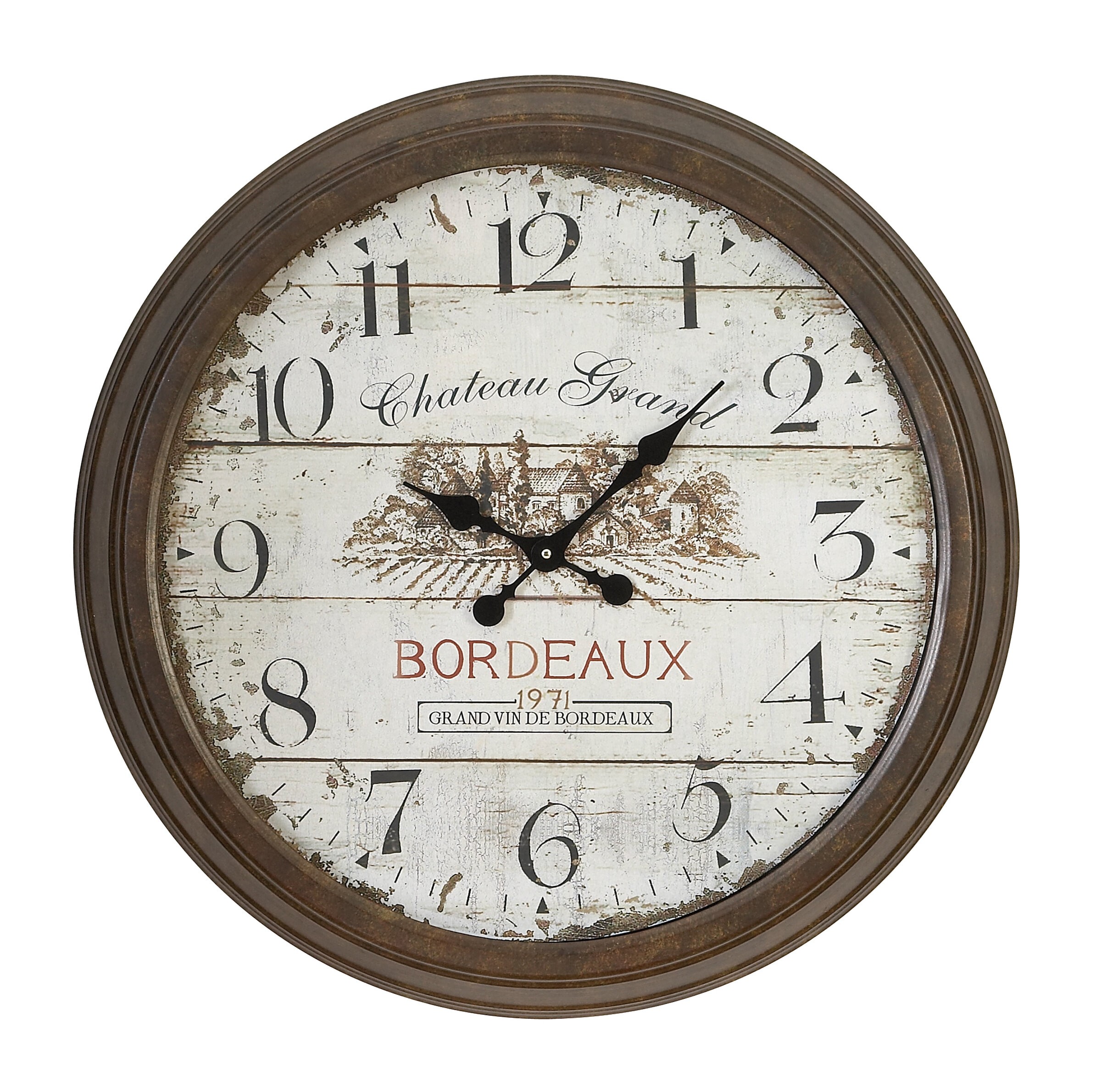 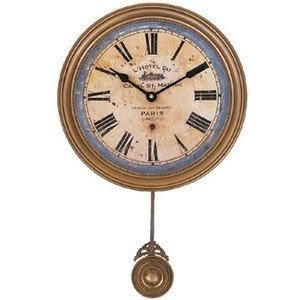 French Country Regency Wall Clock. I have one almost exactly like this ... 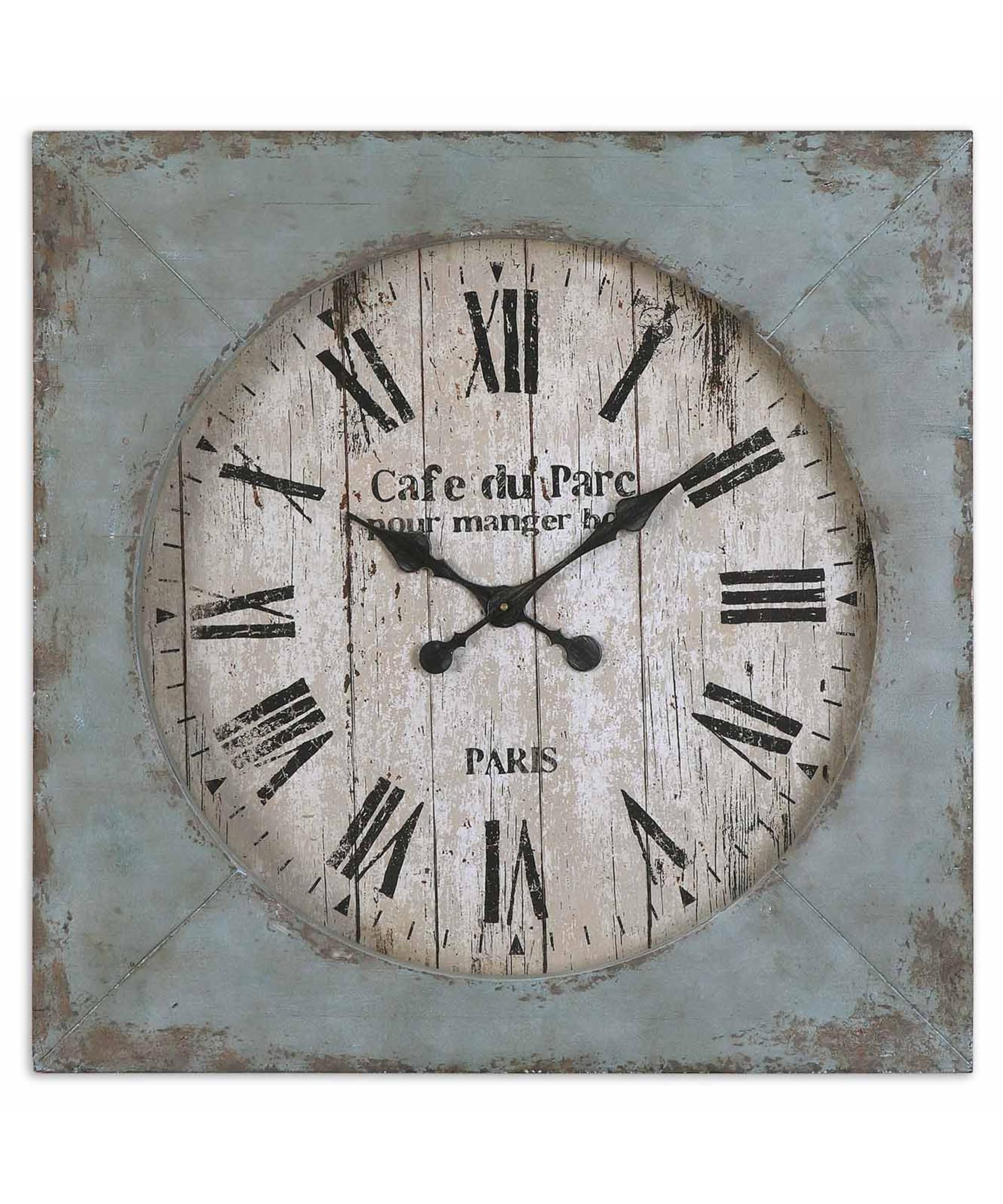 Made from rustic, distressed wood, this round Paron Clock constitutes a good example of the French cottage style. It enchants with the cloudy grey-blue panel, creating a mysterious, climatic ambiance. 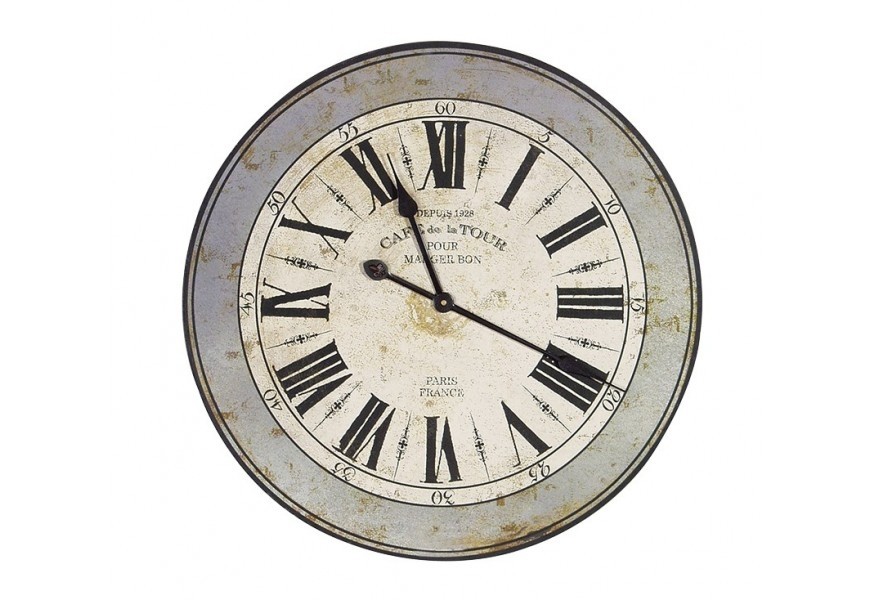 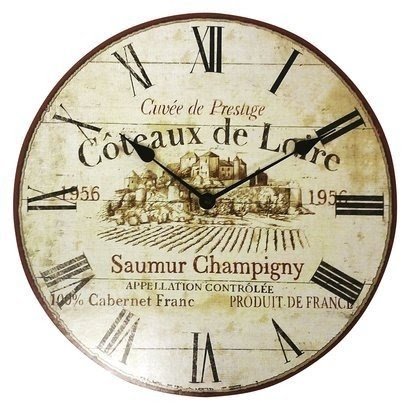 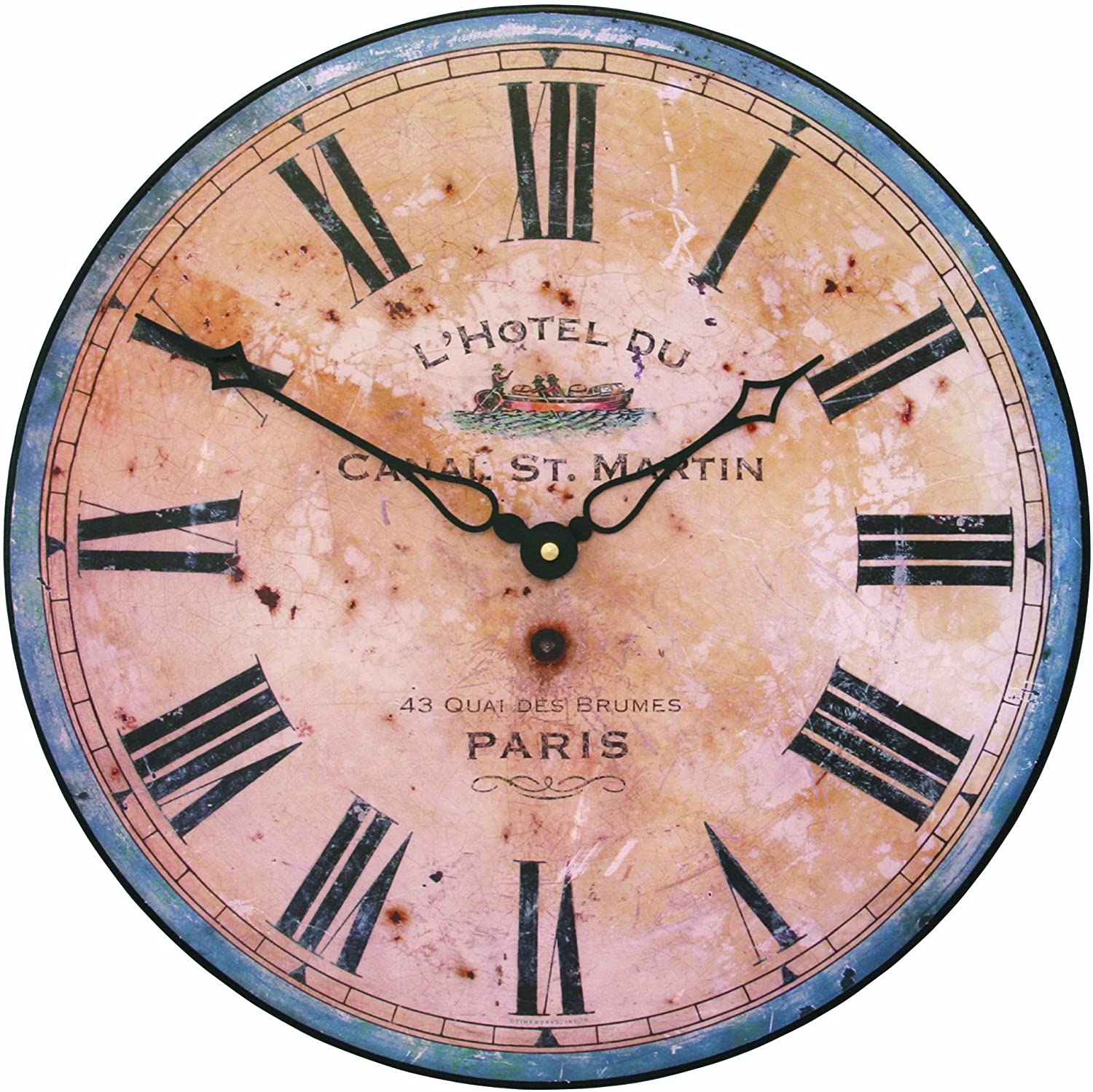 Old-fashioned clock inspired of French style. It it stylised on old-fashioned, so ceramic, circle face clock is aged by patination. This type of clock will be fit to interior of village or seaside guesthouse. 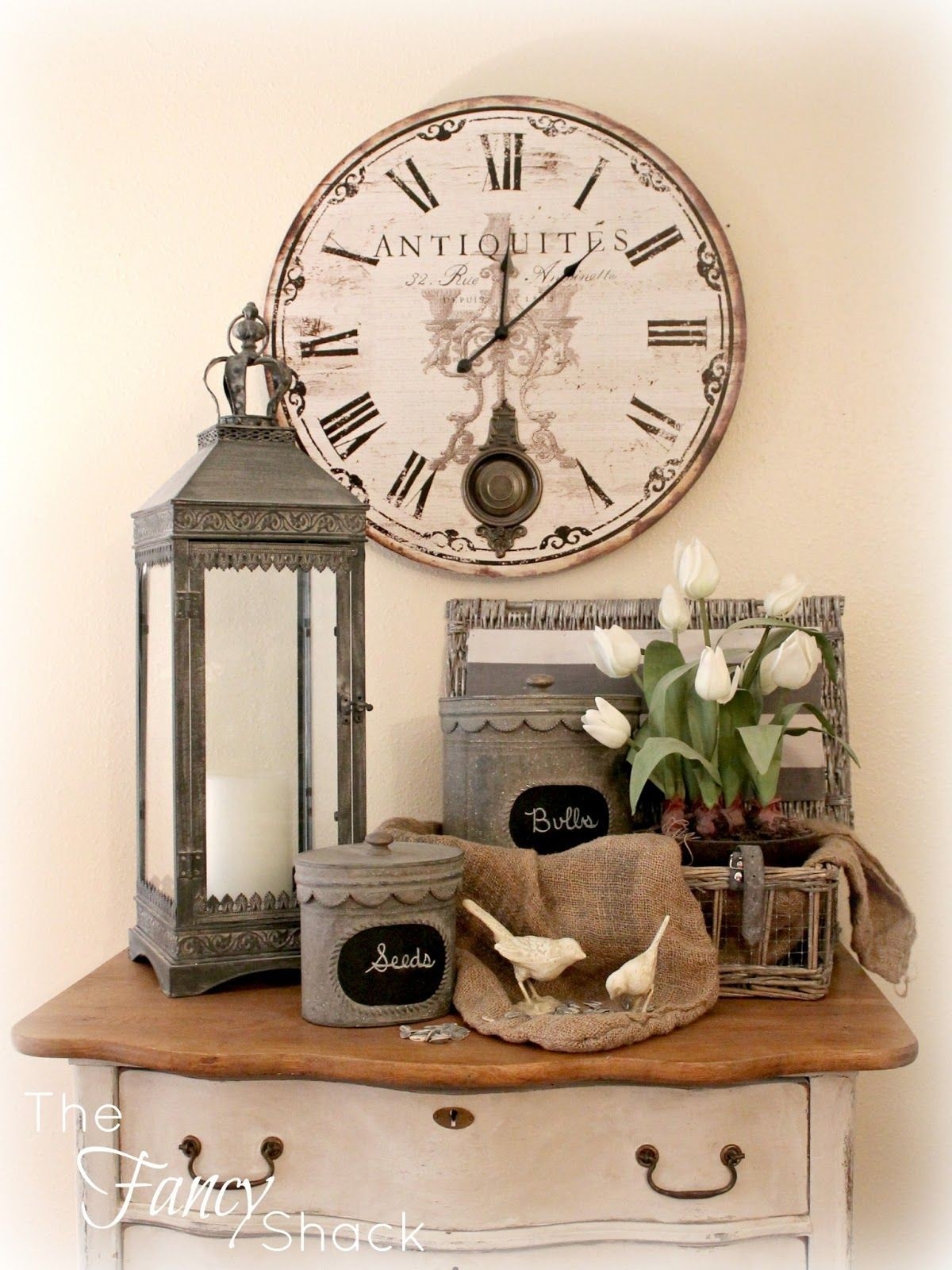 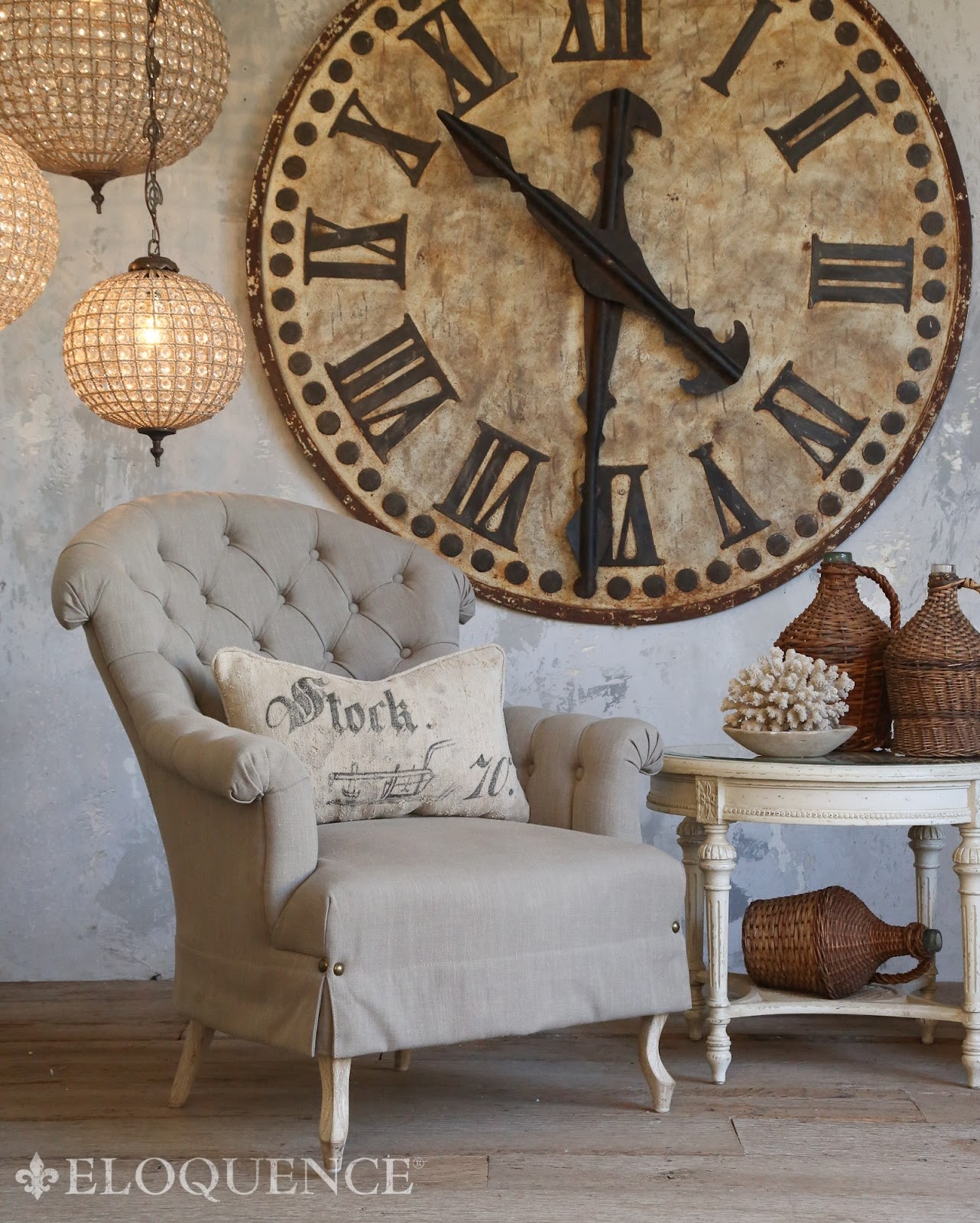 Nowadays, wall clocks are not the most important timers in the home - but we still value their aesthetic value. Just like the advantages of this large round french country wall clock in the traditional country style with a brown dial with cast-iron elements. 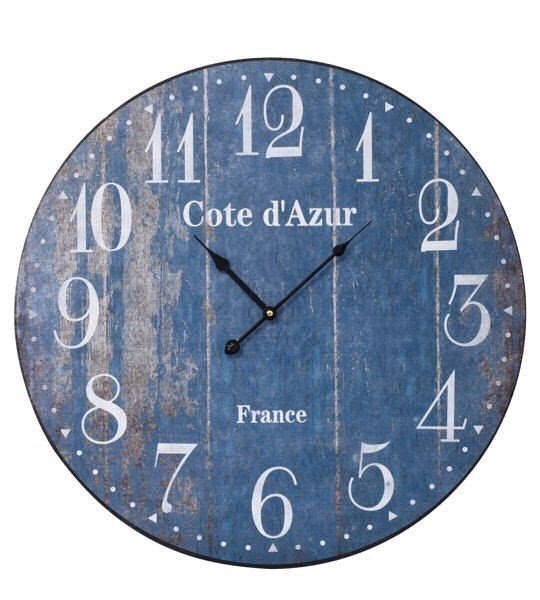