The parlor might be a dated concept, but that doesn't mean your home decor won't profit from the addition of some antique parlor chairs. Get one to sit on, or to attach a classic touch to the room, but whatever your motivation, you will not be disappointed. Take a look at all the antique parlor chairs we have in this collection for your home.

Chloe is a highly-regarded expert in all things vintage and antique. She’s excited to share her vast knowledge with readers and clients wishing to infuse their homes with a mixture of old-time warmth and modern comfort. In addition to her design work, Chloe regularly volunteers at her local community center, teaching DIY projects to adults and kids. 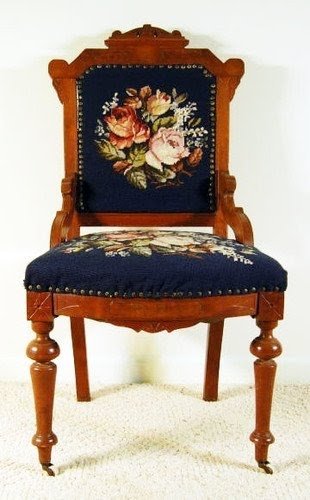 Antique walnut victorian eastlake ladys needlepoint chair
The floral pattern on the upholstery creates the unique design of this antique lady's needlepoint chair. It features the walnut finish, which is suitable with the navy velvet cover. 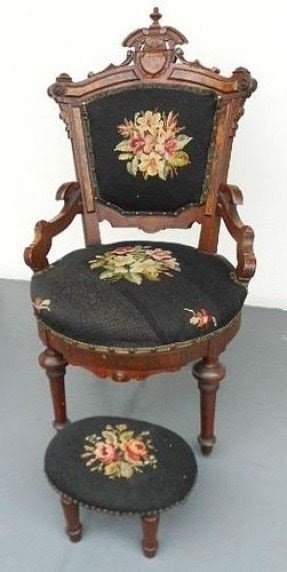 Antique victorian renaissance revival parlor chair orig 1870s clean
Designed in Victorian style, this Renaissance armchair and ottoman set can be a nice way to put some classics into your home decor. Beautifully carved, and upholstered in a quality black fabric, the chair will surely mark its presence. 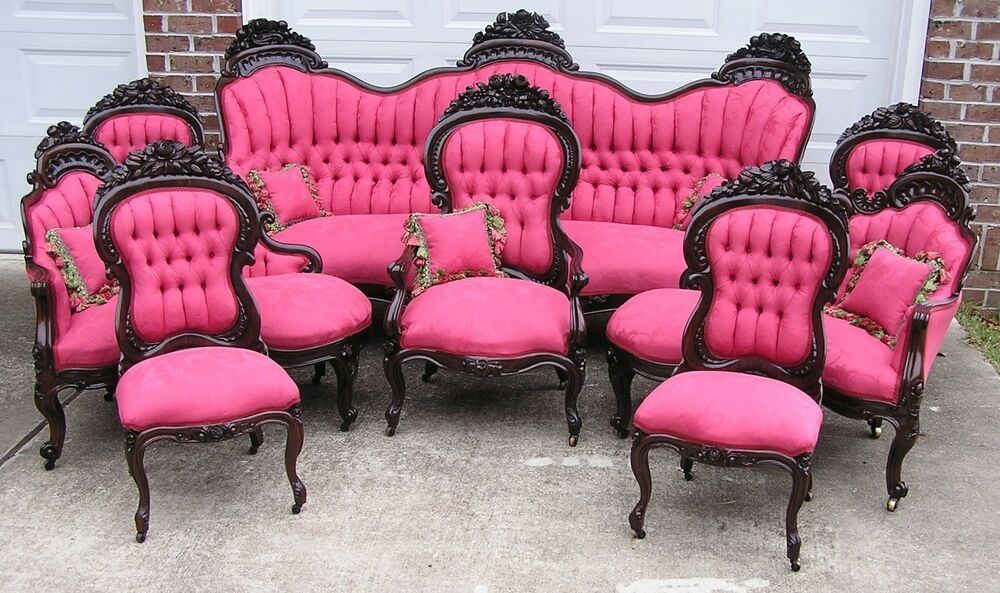 Black frames are an impressive way to emphasize the unusual stylization of these vintage chairs. 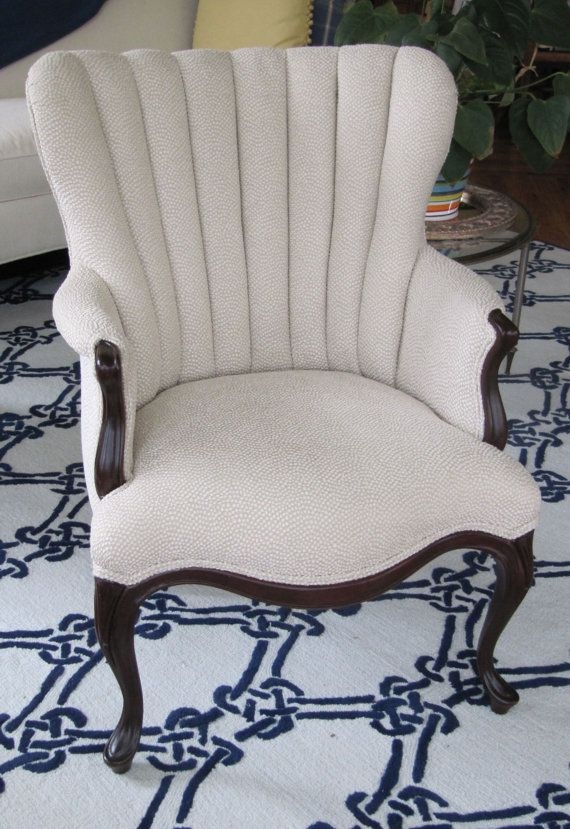 Riverside channel back chair totally
This armchair features an eye-catching appearance, quality material construction, and high level of comfort. The back is wide and nicely tufted, the armrests are padded, and the wooden frame is beautifully sculpted. 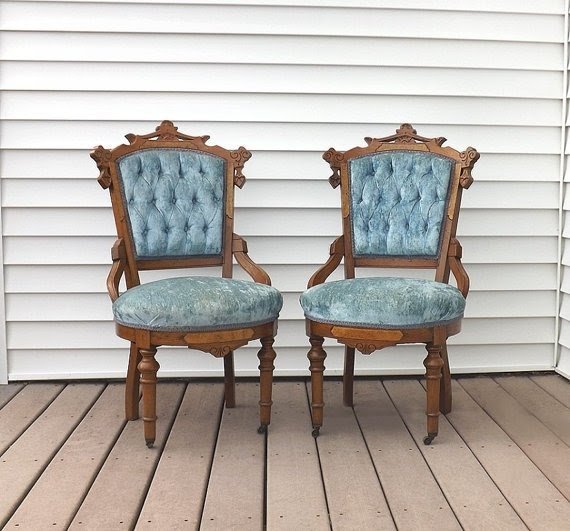 Pair victorian eastlake carved walnut
Adorable antique woody chairs in mid browns. A chair has turned tapered castered front legs, an ornate apron, short sloped arms, a trapezoidal arched back adorned with carvings. A round seat and a tufted back are covered in fabric in light blue hues. 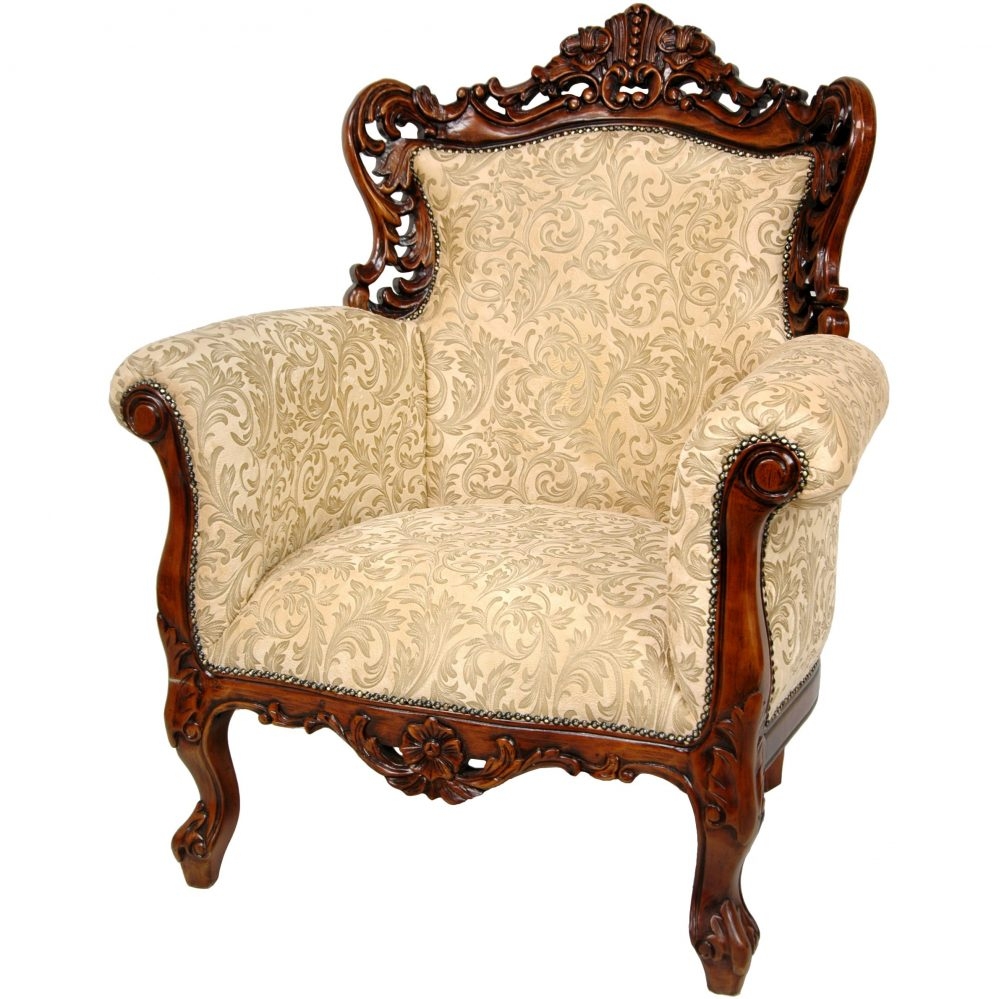 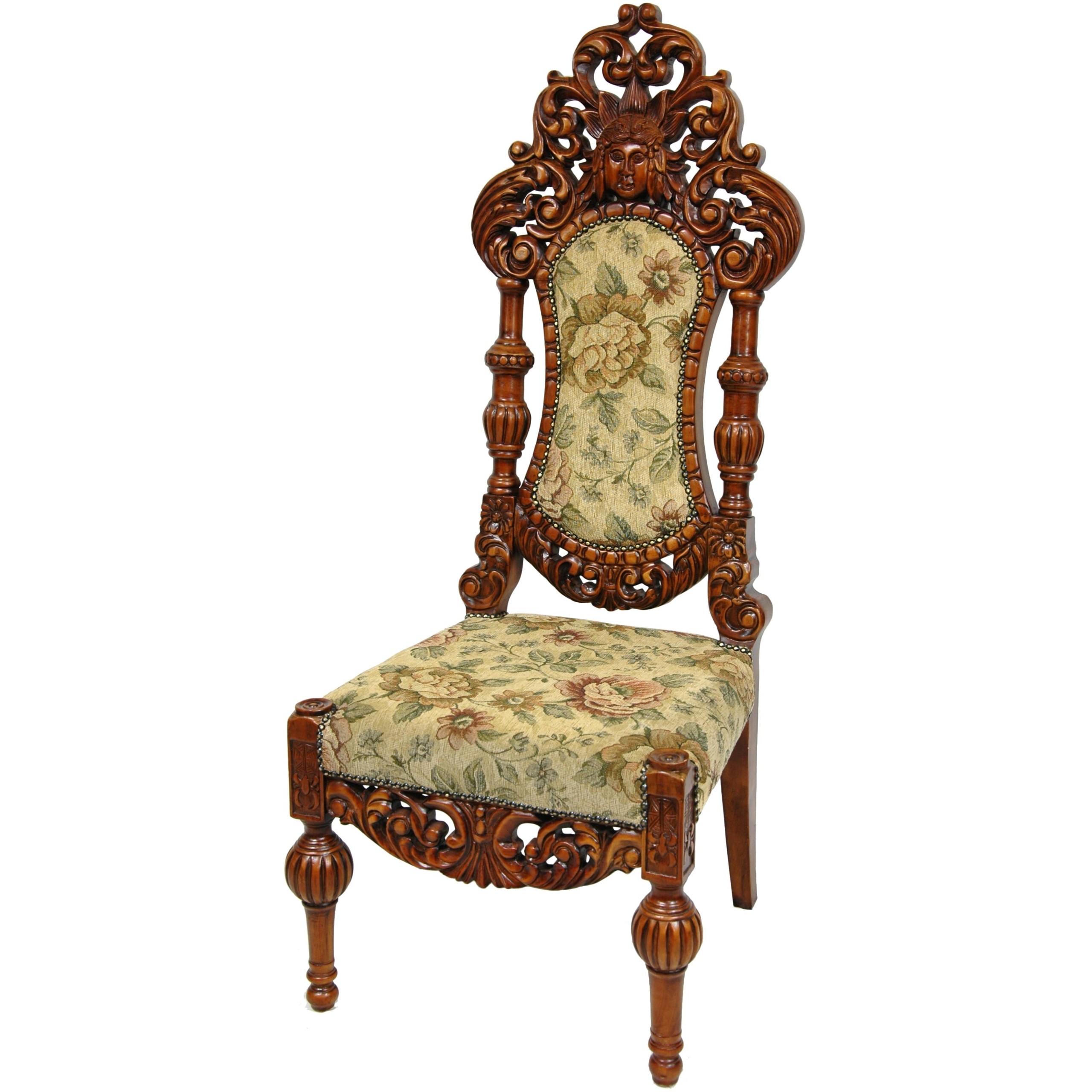 Queen Victoria Parlor Fabric Side Chair
With this Side Chair you will be able to transform your dining room into a luxurious royal chamber. Inspired by Victorian style, the chair features a lacquered poplar hardwood frame, floral pattern fabric upholstery, medium density foam cushion, and hand-carved Venetian accents.

Antique parlor chairs were a combination of comfort and ornate beauty. They were usually the best chairs in the house, reserved for company, sitting quietly on Sunday afternoons or for extremely special occasions. The seats and backs were frequently upholstered with embroidered fabric, the wood was carved, and ornately ornamented. The designs were varied, as one might expect.

What are the most pupular designs of anitique paror chairs?

One characteristic of Victorian parlors was the extreme ornamentation. The Victorian parlor chair is no exception. The wide seats are constructed to allow ladies to manage their skirts, which might include bustles or crinolines, while the straight backs encouraged excellent posture. the back styles might vary, but many were ornamented with elaborate carving above the oval backrest. The arms were curved and delicate, as were the legs.

The French parlor chairs were no less elaborate than the English but were more squarely built. The arms were wide rather than delicate, and the legs uncompromisingly upright and uniform in size from the foot to the seat. They, too, had wide seats to accommodate elaborate dress, and the seats and backs were frequently embroidered.

Not all of the chairs were delicate occasional chairs. Wing-back chairs were often found grouped on either side of a fireplace, or toward the ends of a sofa or love seat. Compared to today’s buildings, many homes were drafty places. A winged back helped to block drafts and was ideal for capturing heat. Even today, a wing-back chair makes a cozy place to relax. Add a nice footstool, a heated throw and pillow and a nap could definitely happen.

Sofas and loveseats often had structures similar to the occasional chairs, with the curved legs for the Victorian parlor, or the uncompromising stance of the French furniture. The seats were deep, although perhaps not as long as the modern couch, and the back upholstery was tufted. The upholstery might vary, ranging from woven tapestry to stiff horsehair.

As might be expected, in Thirteen Colonies in North America, the wealthier colonists imitated their British counterparts. Neoclassical styles that drew heavily upon the classical Greek and Roman styles were highly favored, as were designs by Thomas Chippendale. Upholstery might be leather or a heavy damask.

Empire style parlor chairs traded heavily upon the neoclassical. But instead of the more delicate arms, they might have armrests that resembled the paws of a lion, or they might look like the long, delicate neck of a swan. Silk damasks were highly favored for upholstery. Some of the carved arms might even have been gilded.

By the Edwardian era, 1900-1950, parlors were being phased out in favor of dining rooms and living rooms, both of which were more geared toward family life than formal entertaining. The dining room chairs drew heavily on the heritage of the occasional chairs, with their upholstered seats and backs, delicate legs and arms. 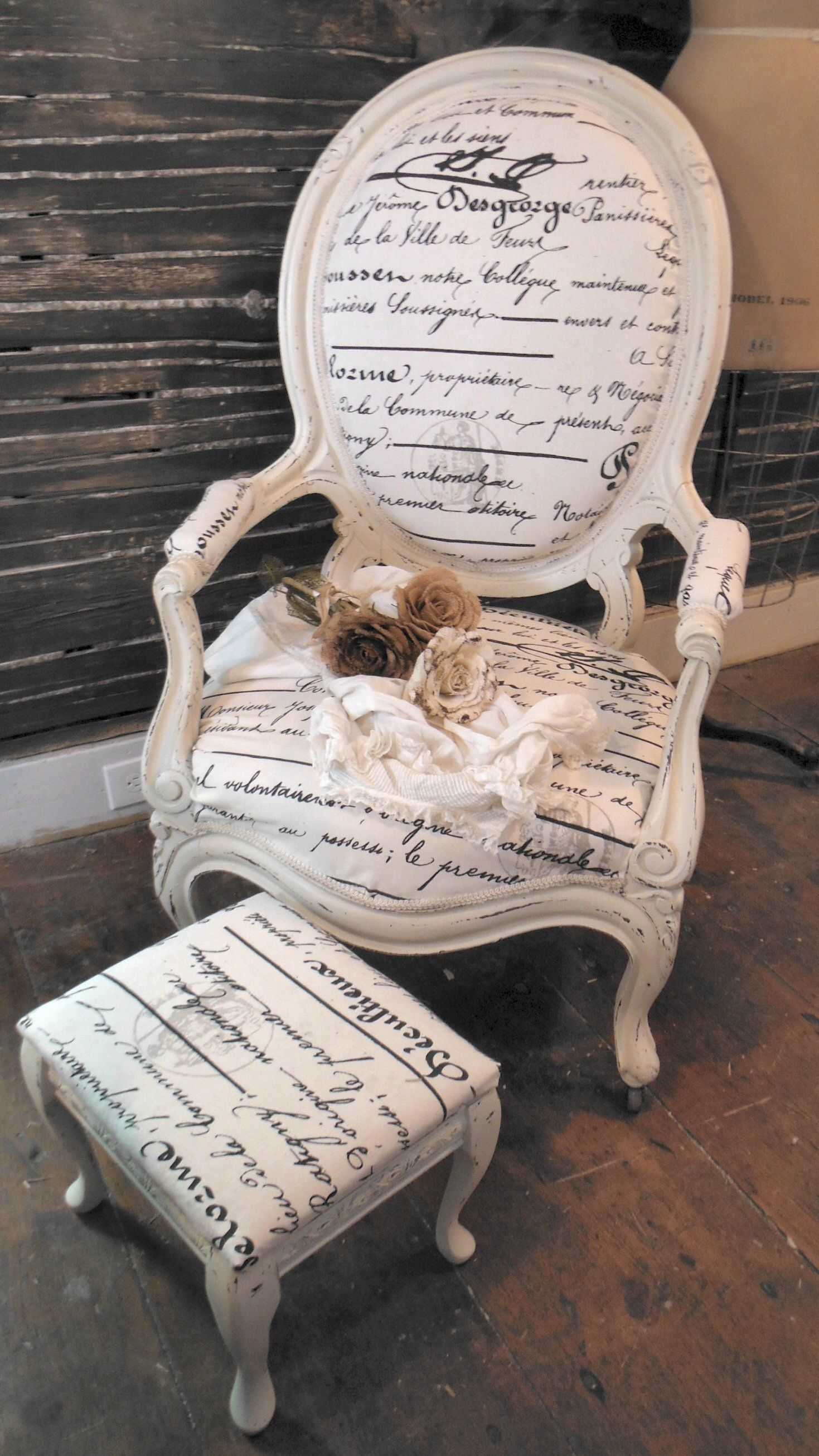 Antique louis xiv style french parlor
Letters are one of the most romantic forms of correspondence and in combination with the light upholstery of French antique parlor armchairs from the era of Loius XV - a perfect duo with a bright wooden frame and analogous footrest. 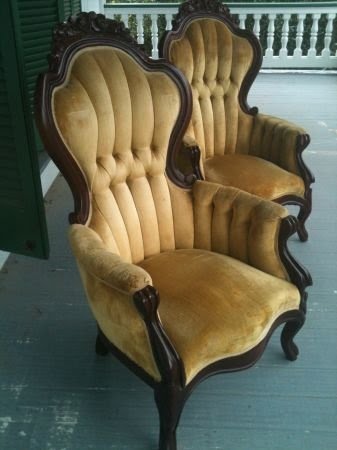 Antique style wooden chairs with a dark brown finish. Chairs' legs, arms and backrest with a carved top are curved and grooved. A seat, full sides and a tall backrest with vertical stitching and button tufting are covered with fabric in yellow hues. 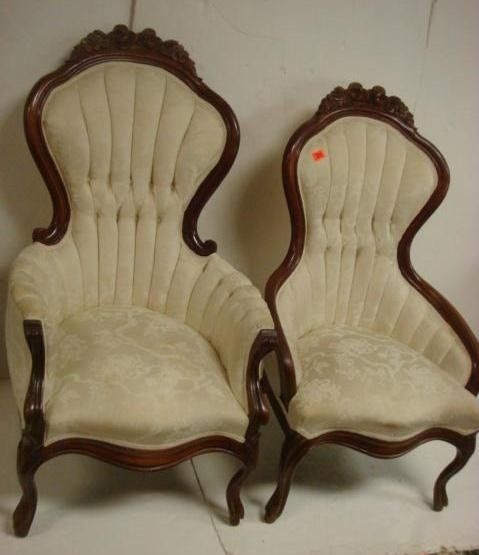 Oh my God, this incredible parlor chair inspired of Victorian style looks like shorter chaise lounge or longer armchair. It has carved frame made of Cherry wood and seat covered with bright brocade. It is available in two sizes! 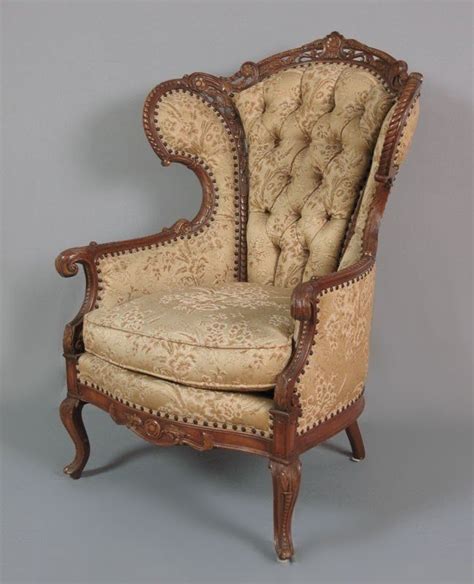 This eye-catching armchair based on a solid wood finish and soft plush cushion cover in lime tint is an excellent way to revive any interior. The Victorian style adds all the interior and interior design of the class and style. 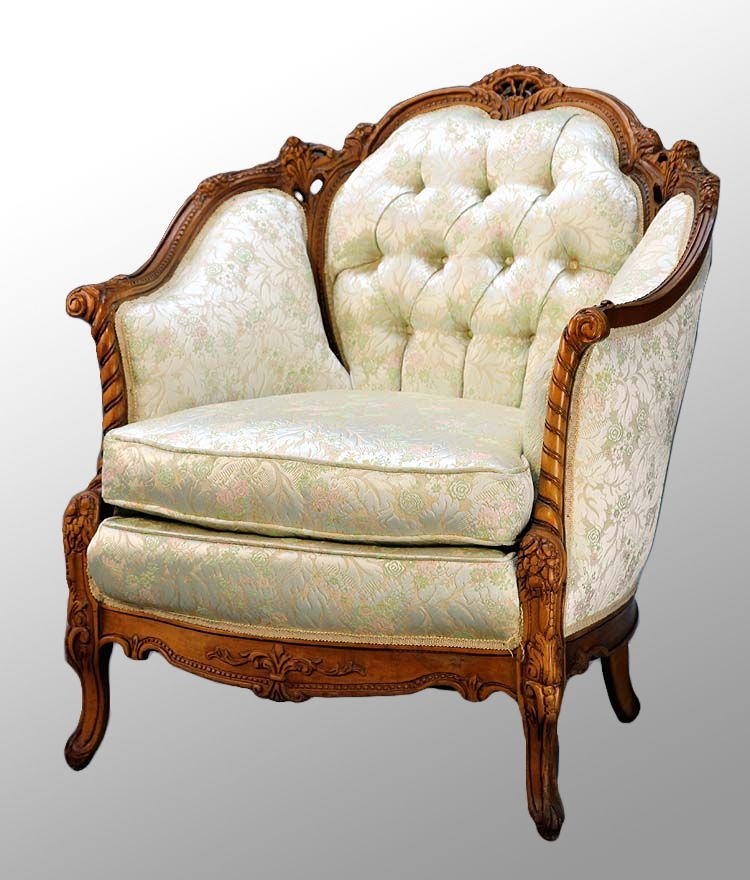 Victorian style chair for your palor - elaborate and detailed in look, just as it should be. Intricately carved walnut wood frame goes with cream colored floral pattern jacquard characterized by beautiful nacreous sheen. 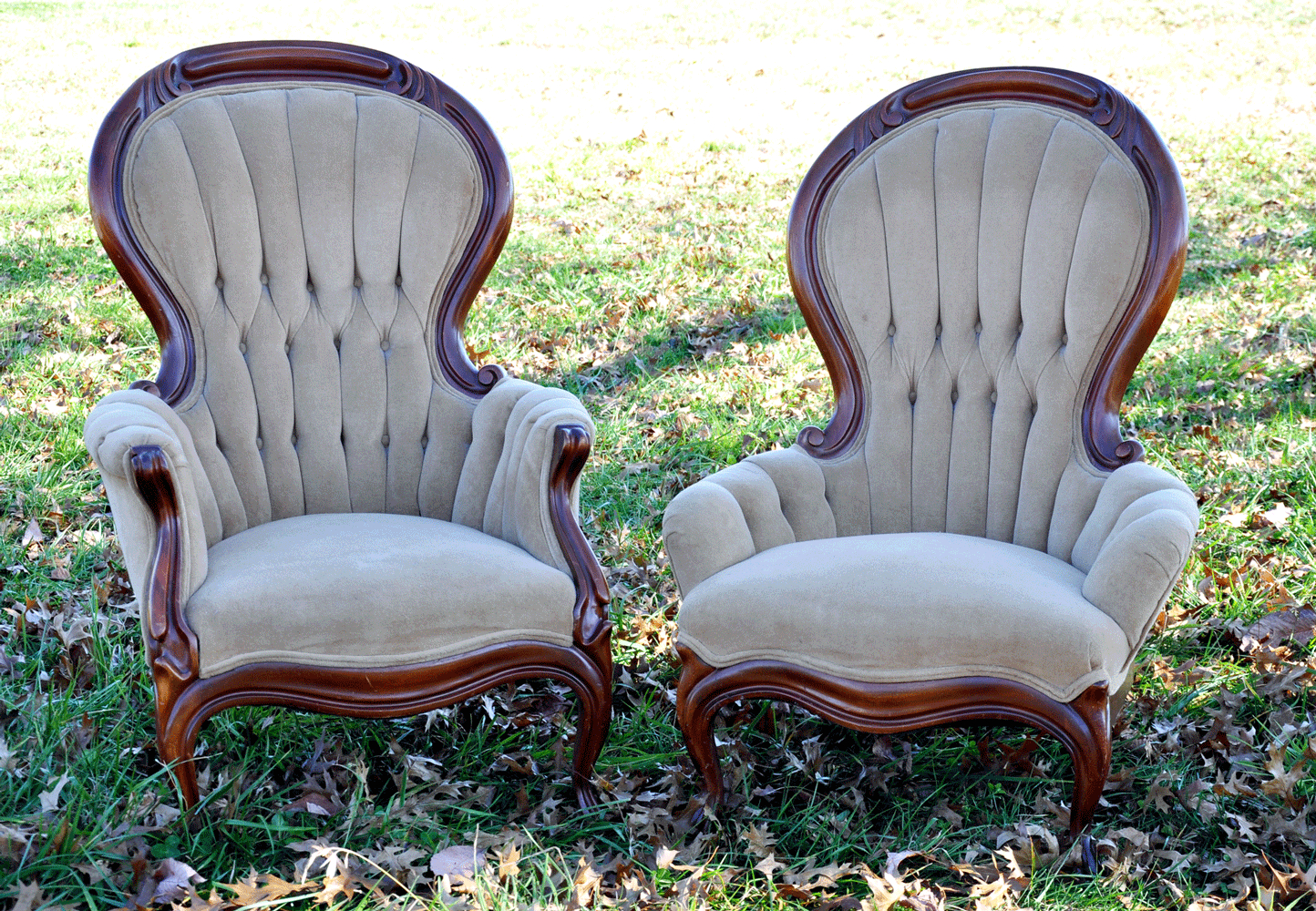 Antique chairs that are decorative and comfortable. They feature soft seat cushions and decorative backrests that are button-tufted for aesthetics. Solid wooden frames include carved details, so these chairs are comfortable and stylish. 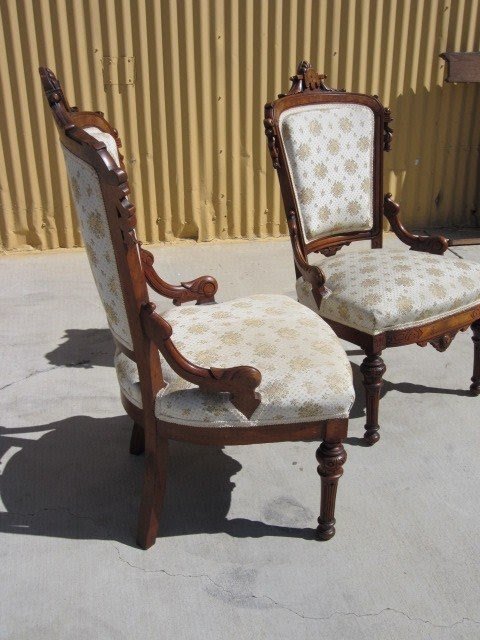 Elegant chair mounted on carefully carving frame made of wood. It is upholstered with high quality fabric and finished with sophisticated pattern. Suitable as dining chair or additional seating in any interior as needed. 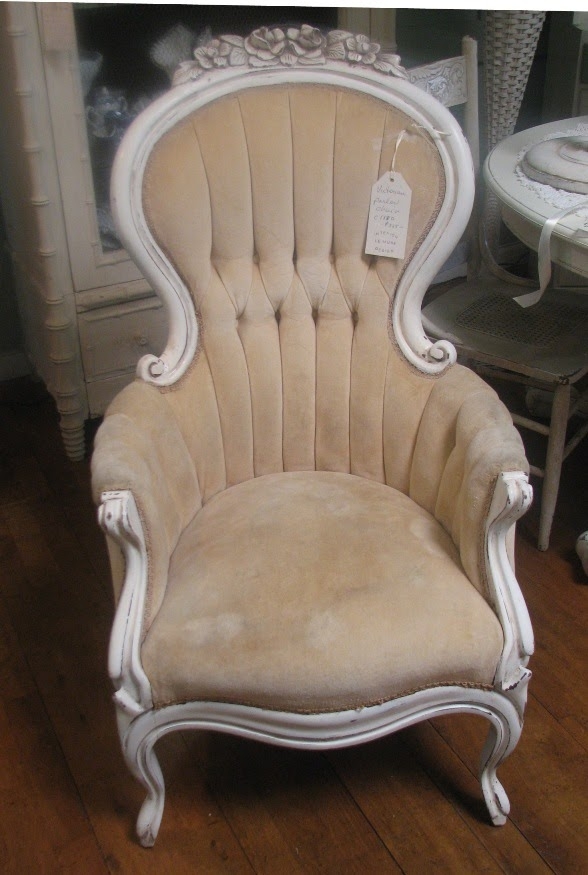 Antique design for an old-fashioned parlor chair, made out of white-painted oak wood carved in a decorative fashion. The chair is fitted with a microfiber upholstery in a beige color with a tufted pattern on the back. 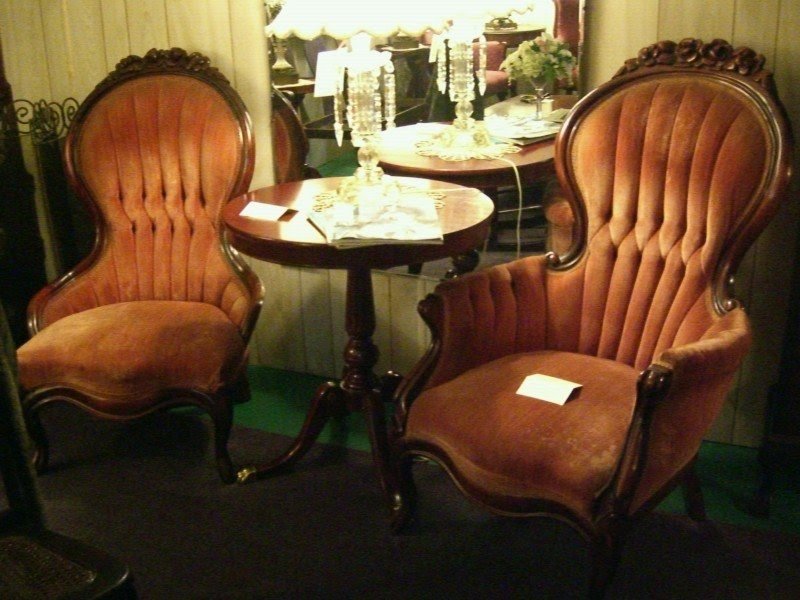 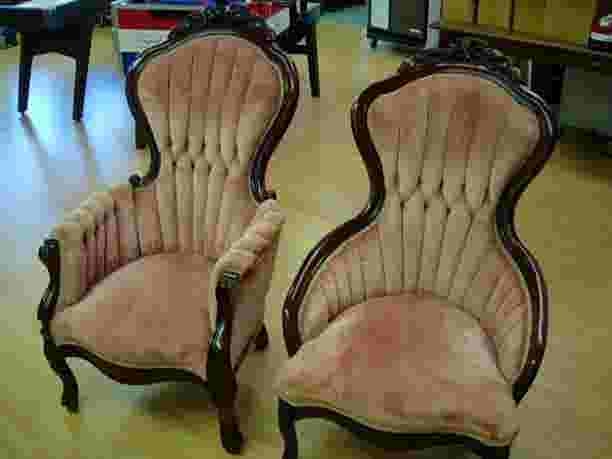 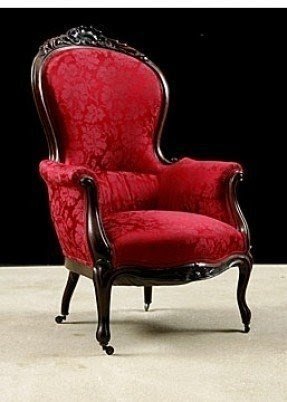 This armchair is a comfortable, stylish and functional element of furniture. It features a nice red color of a seat, arms and backrest. Its rosewood frame is solid and it includes some aesthetic carvings on legs and on the top of backrest. 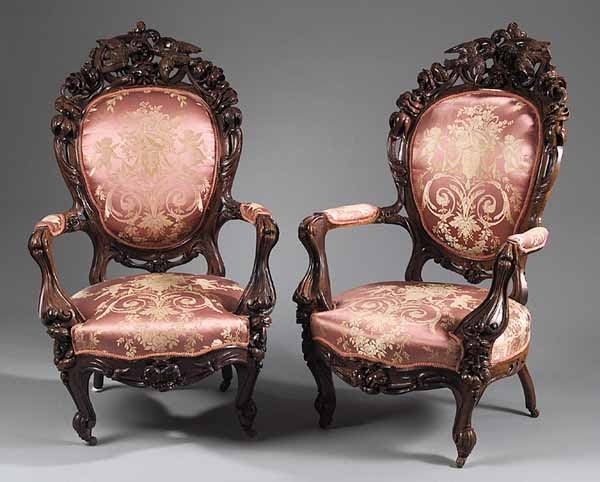 Vintage approach to a set of two identical Victorian parlour chairs made in a Rococo style. The chairs are carved out of dark oak wood with a decorative shape and are upholstered in a pink velvet fabric with royal patterns. 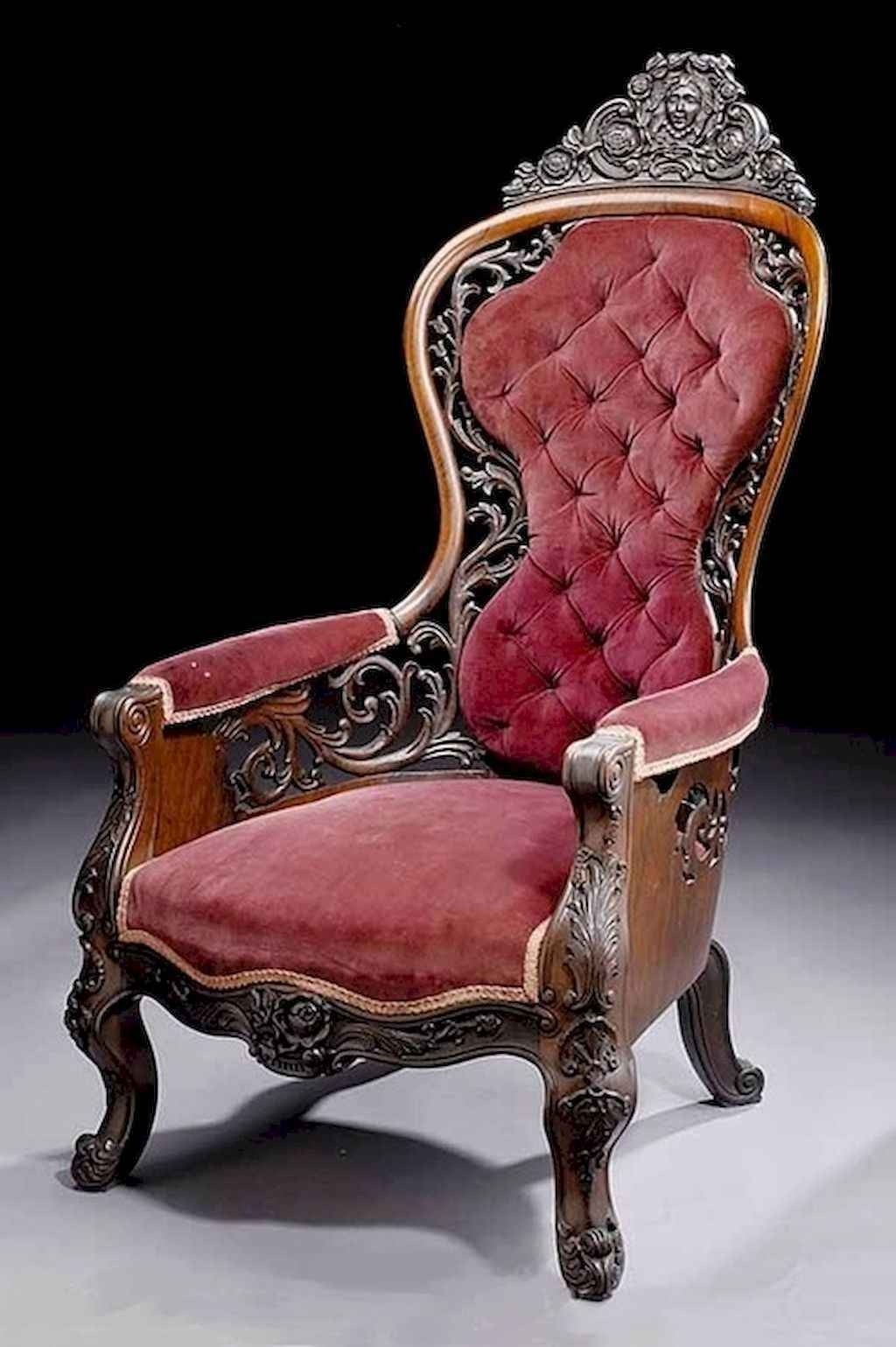 I like decorative character of this armchair. Its wooden frame includes attractive carvings. Soft, padded seat finished in red color provides comfort and support thanks to its padded arms and button-tufted backrest. 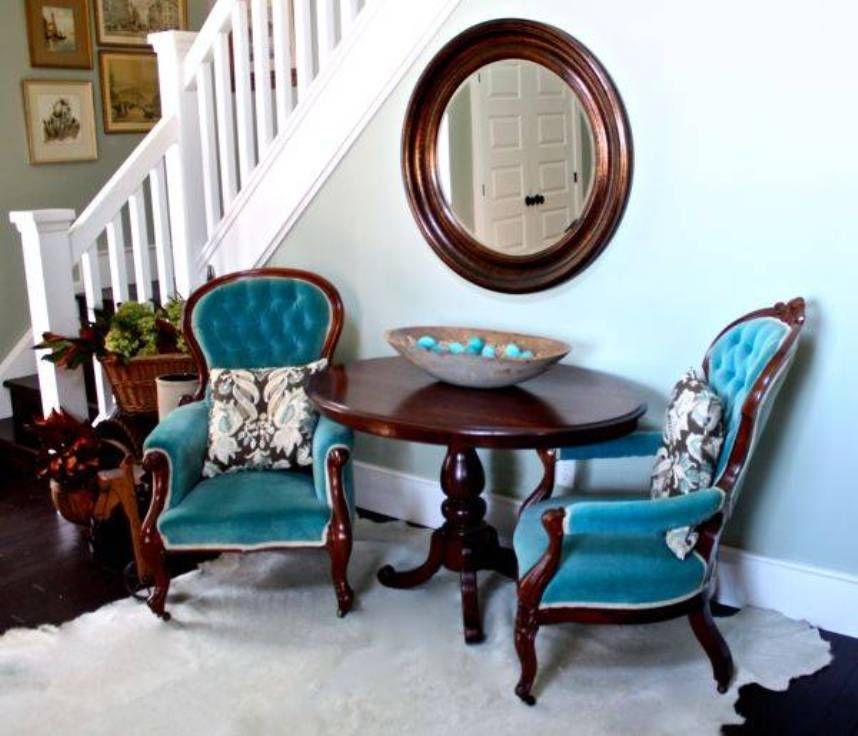 With these antique parlor chairs your home decor is going to be as chic as never before. They've got the tufted backs, solid wood frame, Victorian style, turquoise velvet upholstery and padded seats for enhanced comfort of use. 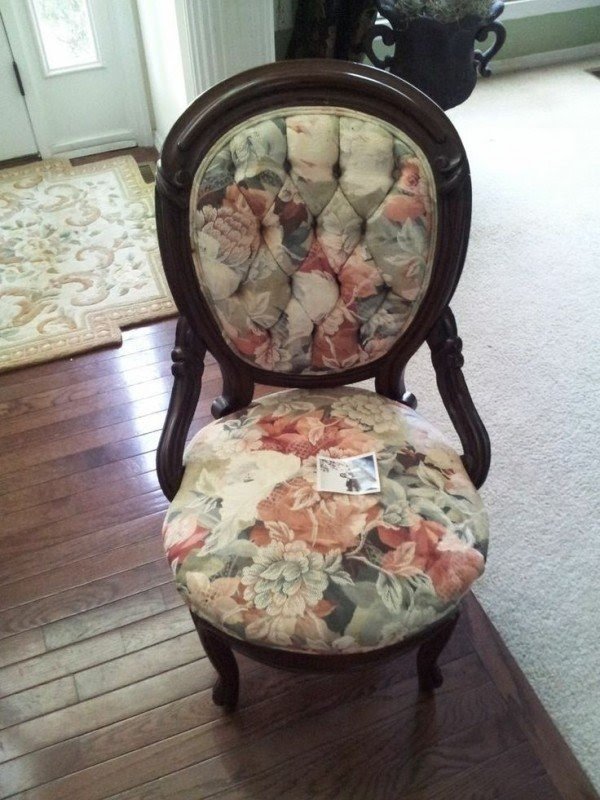 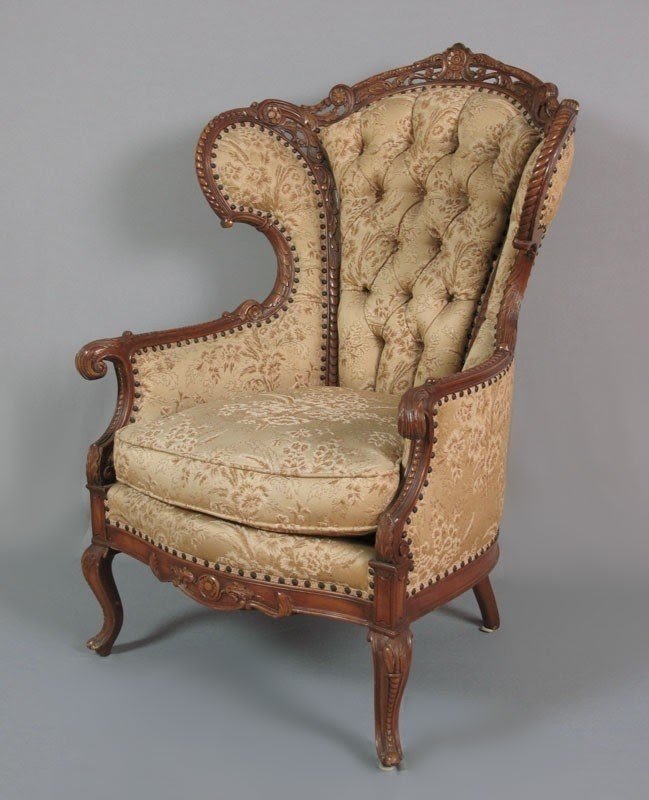